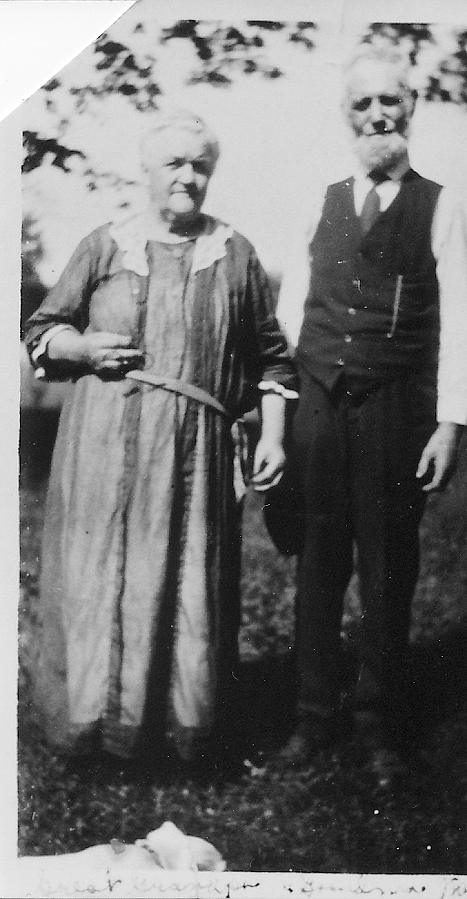 Agnes Stewart Liston Mitchell, commonly known as 'Granny Mitchell', had an interesting life, starting as a young child. The following is from a handwritten account by her, dated Sept. 20, 1933.  It tells of her life after her mother, Christine Stewart Liston, died in childbirth in 1854 when Agnes was 2 years old.  Her father, Alexander Graham Liston, married Agnes Graham--called 'Steppy'-- in 1856, when young Agnes was 4 years old.

I've included this account here, in the Liston section, because it relates her life as a Liston.  See also the writings of Agnes Sim Mitchell Milton and remembrances of Margaret Mitchell Wright for other accounts of their emigration.  For details of the Liston family tree, see the writings of Alex Liston Fischer.

Scans of the original document are in the table below.

To my Dear Children; by their desire.

Dear Children, the best mither ever raised: you have often asked me to write a history of my life, so now, as we know not what a day may bring forth, I am going to try, in my ain auld fashion, to give you as it comes to my mind, the main facts.

When my mither deed and left six helpless bairns, to her hert an her hame, auld granny took me. And to mither, she made a sweet solemn promise that she'd never part wi me till death steeked her eye, and how willingly she would hae kept that promise, but it wasn't to be: fir a step mither cam whaur mither had been, and she was determined that I'd be taen hame. Weel dae I mind o'seeing grand-father Liston's gig (carriage) coming along the road, with father and his young second wife: what I said to my sister I don't remember, but I never forgot what my Aunty Helen Liston said to me, as she patted my head and it wis "my pair wee bairn, ye dinna ken whits afore ye", an little did we. She was only 2 years older than my oldest brither, and he told me after I grew up, that the dish wi white wash stood sae close to his hand, that laddie, like he wus, lifted it and threw it at her before she ever got oot the carriage. A lot more young and old, being there, an doing all sorts of mischief, he never wis found oot, and never regretted his action. Neither did I.

I was left wi Granny for about two years & will say it was the only glimpse o' childhood pleasure I ever had. For I must have had a happy time wi Grannie and five Aunties an an Uncle, all crazy about me. I stayed with Aunty Maggie, who had no bairns o her own, & who wanted to adopt me. They lived at Stirling Castle and took me all through it and said they laid me in Mary Queen of Scots cradle. Then back to Grannie. Stirling is where I first went to school and saw my first circus. Grannie kept a way side hotel, the Aunties helping her and Uncle working the farm. Grandfather died before my time. I used to hear him spoken of as a upright and honest, God fearing man, wis Andrew Stewart o' the Milton.

My Aunty Agnes, whose namesake I wis, took most care of me in regard to my clothing as she was a dressmaker, but most of the time she was away from home, sewing for the family at Montrose Castle, but when at home she and Aunty Jess always had a time aboot who would put up my curls, Aunty Jess thinking she could do it best. Many a time when curling time came, both myself, comb & brush had to be hunted up, and I know now, that many a time they passed my hiding place, pretending not to see me. Oh! I must a been a spoilt bairn, for weel I mind if one said a cross word tae me, the rest, Grannie an aw, took my pairt. I never was punished by Grannie only once, and that wis for sliding on the ice on the Sabbath day, an she sent me tae bed withoot my supper; but it wasn't very lang till Uncle Willie cam in wi a tray wi lots of goodies, pretending Grannie didna ken ony thing aboot it ava. How weel I mind of her sending me to a neighbors fir eggs, wi great cautioning no tae break them, an whin coming hame, I spied a bird's nest in the hedge I put doon the basket, as I thought wi great care. I made fir the nest-but alas, the basket 'o eggs whin I got hame, I told Grannie that Mrs. Blair said she was sorry but the hens had awe laid broken eggs that day. And when she looked in, hoo she did lauch, an I've been telt since, she lauches & telt aboot it, many times, an the tears rinning-doon her cheeks. Newspapers only came aboot once a month & she always hid them on Saturday nights so the Sabbath day wouldna be broken by reading them, and we daurna whistle even, on a Sunday.

I never saw her angry, but aince, that wis when a tinker (pedlar) cam in an wanted his dinner. She said to wait till the men wis through & he reached over & lifted the beef aff the plate, & walked oot the door making the remark-I'm shure of this, ony way." I can see her yet wi her mutch, white as snaw. Her black merino gown, black apron, and shepherd tartar plaid roon her shouthers. A big pooch hinging doon her side, an every feather she cam on, she put in the pooch, till she got a feather bed. Her hair, ho nice & brown it wis & smoothed doon oer her cheeks. The Duke of Montrose's Castle was two miles east of them, an whin they had a shooting or fishing party, they waud tak their dinner at Grannies.

I can see a great big roaster afore the open fireplace wi twa or three chickens fastened on each end of the iron rods & the roast in the middle, kept turning roon itself & the drippings fell inta the deep bottom, & it wis my job tae take the big ladle and baste them. There wis cakes an tarts that Aunties made. If there wis just a few men they ate in the dining room upstairs, but if a big party they just had the common room downstairs. I'll describe it - there wis an open fireplace the walls white. Chairs an table all white, scoured wi sand an lime. The slate floor washed, then pipe clayed and pure white sand scattered on top. The great front hall and kitchen floors and even the stairs were the same, made of stone, but covered in the middle wi a stair carpet and brass rods, an whit a bonnie mahogany railing on the side, an mony a bump I got sliding doon them.

The Duke wis a fine man bit the dutchess the least said aboot her, the better. She had a little basket carriage wi a pair o shetland ponies she drove, as she & the Duke hardly ever rode the gither. She wore a great wide hat and a scarlet cloak. Aye day she wis driving, for a short cut, through the pasture an a bull, catching sight o' the cloak chased her. Men were chopping wood near by & pretended they didn't see her till the bull got right up to her. Then they sprang oot & chased it away. When the lads & lassies saw her coming we aye hid behind the hedge or stone dyke till she went past, so we wouldn't have to curtesey to her. The Dukes sister gave me a wax doll, all dressed with clothes she made herself. I'll never forget it, wi its blue eyes that opened & shut when ye pulled a wire.

I mind the nicht father came to Grannies to get me and take me back to my step mother, & Grannie getting a letter for him to read. Then he went hame & Grannie lifted me on her lap an as she stroked my curls, the tears draping on my face she said I canna or winna gie my lassie up. But father came back again & didna get me & again he & Steppie cam, and Aunties & Granny were greeting as they tied on my auld bonnet & my tippet & father had me in his arms, but tore off the tippet & hat & years after I was telt, it landed in the middle o' the fire & burned & they had tae gae back withoot me again but wi the promise I'd be taen hame the next day. An weel I min Aunty Jess taking me as far as Auchingye (Father's farm) an I wis to walk straught tae the hoose, but as quick as Aunty dissapeared oer the hill, I followed her back, but, being afraid to gae hame to Grannie, I hid behind the hedge & there the schule bairns heard me greeting, & took me hame to Grannie, but Aunty Jess took me to Faithers hoose again & there left me tae gang in & whit a scolding my step mither gaed me, wi my heart like tae break till my sister Maggie put a stop tae her an I wis telt later that Maggie wis the only one Steppy wis afraid o and she wis mither tae us as long as she leeved but she died shortly after.

Auld Grannies hoose wis only 1 ½ miles fra Fathers hoose & we a went tae the same kirk, & the schule just across the road bit us three mitherless bairns, Mary, Lizzie & I didna dare lift oor eyes or speak to them. Grannie tried to send Aunties back o' the schule wi oor dinners, bit Steppy heard aboot it & bribed some o' the scholars wi pennies & candy, tae tell her aboot it, so that wis put a stop to. Then some o her neighbor bairns, put som dinner from her, in wi theirs, & we got extra that way, till she found that oot tae, & the only thing the auld body could do, wis to knit us things ta keep us warm an many many a petticoat, mittens & stocking, o' her ain spinning & weaving did we get, but alas even that wis denied us, for Steppie laid them past for her ain. So my braw wee velvet turban, wi its white feather, black velvet tippet lined wi blue silk & blue ribbon strings, little silk dress & wee white boa white stockings & buttoned shoes, I never got, for they must of seen she would never let me wear them. Bit loosing them wis a terrible sorrow to me. I mind one day Steppy stood behind the door when sister Lizzie came in an she knocked her doon, so she wis unconscious for hours, because sister widna lick me for doing some little childish thing. Another time, Mary, my sister, spoke tae one of my Aunties at the kirk door, & she tied her wi a rope & licked her till she drew blood & some of the neighbors saved her.

There are some questions regarding Granny Mitchell's death date. Margaret Schaub's material says March 4, 1933; an obituary for her husband mentions her death as March 5, 1933. Yet the above letter, signed by her, was dated September 20, 1933. Perhaps she wrote down the wrong date, and it was 1932.